Ben recently sat down with The IMDB Show to discuss Season 2 of ‘The Punisher’, ‘Westworld’ and more. You can watch the interview here, or in our video archive. 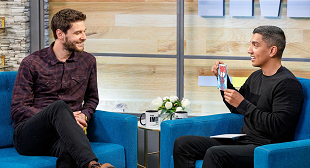 The full-length trailer for Season 2 of ‘The Punisher’ has been released. Watch the trailer here. Screen captures are in the gallery. Season 2 premieres January 18th on Netflix.

The first teaser and 6 stills from Season 2 of ‘The Punisher’ have been released. Watch the trailer here, or in our video archive. Season 2 premieres January 18th on Netflix.

Most Americans encountered British actor Ben Barnes for the first time as Prince Caspian in the Chronicles of Narnia series. He’s been working ever since, as viewers of The Punisher and Westworld can attest.

What Leonard and Jessie didn’t know was that he’s a talented musician, which he tries to incorporate into his roles, and that he loves doing accents—rarely playing an Englishman. He’s intelligent, funny, forthcoming and a real charmer, as you’ll hear for yourself.

Our gallery has been updated with screen captures from S2, episode 8, of ‘Westworld’ (titled “Kiksuya”). A promo for episode 9 has also been released. Watch that here.