Just a reminder that ‘Gold Digger’ premieres tonight at 9 PM on BBC1 in the UK. You can view new promotional images in the gallery, and a full length trailer in our video archive. 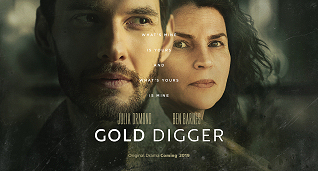 The official descriptions for all six episodes are behind the cut:

Julia and Benjamin meet by chance and start dating. When Julia introduces him to her grown-up children, they question if Benjamin’s intentions are financially motivated.

Julia realises she’s in love with Benjamin. Patrick and Della, who are suspicious of Benjamin, follow him and catch him in a compromising situation. Is he really who he seems?

When Julia’s children accuse Benjamin of infidelity it threatens to split them up. But their relationship grows stronger as they move in together and Benjamin proposes.

When Julia tells Ted about her engagement to Benjamin it causes unexpected consequences. Meanwhile Patrick entreats Julia to get Benjamin to sign a pre-nup to protect her wealth.

When Benjamin’s half-brother turns up, Julia goes on a quest to find out what Benjamin’s hiding. When she discovers his secret, will she still marry him?

Julia is reeling from the revelations about Benjamin’s past. But the future is up to her.

Woohooo! Loving these promo pics, there’re so many and they’re SOOOO good! <3 You're a magician Stephanie! :D

I was on the edge of my seat during the first episode of Gold Digger and had no nails left after the restaurant scene! *lol* Can't wait to watch the other episodes and find out more about Benjamin… :p

Thanks for the scene captures for episode one Steph. I was happy to see that you had posted them. This is the only episode I have been able to watch so far. I’m hoping to see the rest of them somehow.

VPN life. The things we do for looooveeeee! And you’re right there with us! Thank you for going out of your way and pocket to secure these hardcopy scans.

No other fansite goes to the lengths you do. And no pretender will steal your crown, queen. We know better. <3

A question for F2Write.. I had the same thought to use a VPN in order to watch. But when I attempted, the iPlayer specifically says it doesn’t allow VPNs as it can’t make sure you’re actually in the UK. So if you don’t mind helping a fellow fan (that’s really upset there’s no known way for her to watch this yet) out – what magic did you use to get around their anti-VPN nonsense?!?

Thanks so much for the screencaps and other awesomeness. My internet is too slow for a VPN. Hope they release it in the US at some point.